When I was a student at the IISc, Bangalore the bookstore there used to sell Douglas Adams The Hitchhiker’s Guide to The Galaxy (H2G2) ‘trilogy in four parts’.  They came with a special cover design. Looked individually, these covers looked gibberish.  But when you arrange the covers side by side, the centre of the tiles shows up a unique image of the spaceship. There is nothing unique about this.  But as you rearrange the other surface at the centre of the tiles.  This was  amazing creativity, on par with the creativity of Douglas Adams himself.  I did not buy the set then.  To this day, I rue missing the opportunity to grab that set.  Buying a brand new set of books that you have already read was not within the means of a graduate student those days. Two of my friends, Ramanan and Guru had those sets.  The slideshow below shows the rearrangement. 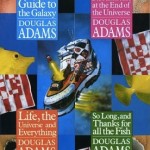 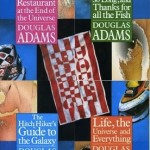 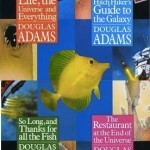 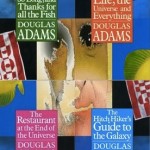 Today, I accidentally stumbled on Gary Day-Ellison’s blog.  Gary was the designer of those cover sets.  He writes;

…I played around with some nice images. Chris Foss produced a classy SF illustration of a spaceship in the shape of a Rebok training shoe. Fate demanded a fish this time. A very small place in North London produced a towel with the legend “Don’t Panic!” woven in. And Douglas had made a self-portrait on his AppleMac. But felt none of them were strong enough to stand alone. Off to our author’s house in Islington. Unable to hear over the most sophisticated sound system I had ever seen we played games with paper. Marketing Gods would call it brain-storming. I chopped copies of the images into pieces. Then settled on cutting each image into four. So by reconfiguring them you see the whole of each image.

Now, here is something that many do not know;

Just out of devilment, the spines, when in chronological order spell out “42”. In Luscher Colour Test colours. Nobody got that.

We knew this.  Of course, Ramanan, Guru, Arulselvan and me spent hours playing with those books. The disappointment of not get this set was compensated later when Ramanan got me the 4-in-1 book – personally autographed for me by DNA. That is for another day.