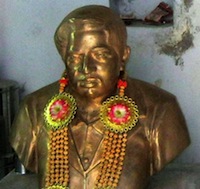 Ramanujan’s home is today squeezed between Pandian Hotel on one side and a sanitaryware shop on the other; a hoarding of the shop rests partly on its roof. Very little of the original street exists, but for an old godown diagonally opposite his house called Vembu Ammal Mandapam, which is in a shambles, and of course the Sarangapani temple.

One can’t help being moved entering the house with its low doors. It lies largely empty today, but for a cot and a bicycle parked inside. Maybe the family did not have many worldly possessions that could be preserved and displayed proudly.