There seem to be a good interest emerging on Multi-touch Displays. At CES 2012, so far MultiTaction and 3M have showcased their latests. (click on the image to see the gallery). 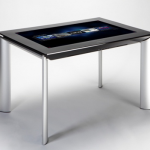 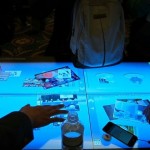 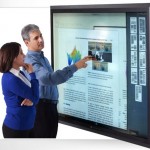 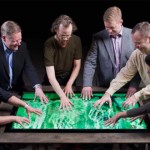 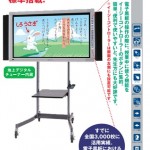 Microsoft has been touting its Surface technology for a long time.   It looks like the concept of multi-touch interactive table display is finally garnering momentum. Samsung announced its SUR40, a few weeks ago. As the model name suggests it is a 40 inches display at 1920 x 1080 resolution. Samsung’s product is already available in the market.

MultiTaction’s Cell MT550W7 was unveiled at CES 2012 today.  It is a giant 55 inches display.  It uses its own patented optical imaging technology Computer Vision Through Screen method. Though it runs on Windows 7 (upgradable to Windows 8, when available), it is a direct competitor to Microsoft Surface technology.

Sometime at the end of 2010, Pioneer Corporation announced a touch table concept.  I was watching for the commercial product of that.  Pioneer is now marketing it as a classroom board, with a very japanese name Cyberboard.  But it is available only in Japan.

We have an aspiring multi-touch wannabe in Touch Unicom within our department’s entrepreneurship program.  Their focus is not on the hardware, but collaborative workspace software and security.

Perhaps a mention should also be made of Perspective Pixel, that pioneered the concept, with CNN adopting it for its 2008 presidential election telecast, Magic Wall.